GARIBALDI AT SQUAMISH (GAS) IS A PROPOSED SKI AND ALL SEASON RESORT TO BE LOCATED ON BROHM RIDGE NEAR SQUAMISH.

Brohm is a popular sledding zone in the winter and hiking, biking and dirt biking spot during the summer months. The area is used by countless numbers of people and has roughly 300 registered members in local motorized clubs alone. The developer of the GAS project is Aquilini Development and Construction Inc., which is a subsidiary of Aquilini Investment Group, who are the owners of the Vancouver Canucks, Sandman Hotel chain and developer of many large construction projects.

If the GAS proposal goes through, Brohm is potentially lost as a riding zone. The Black Tusk Snowmobile Club (BTSC) will be hit especially hard with this, as it is their primary riding spot.  The Sea to Sky corridor has lost other riding areas in the past, most notably the Callaghan before the 2010 Olympics. Due to the Brohm Ridge tenure land being in question for development, the BTSC cannot secure a proper Section 57 designation from the government to charge grooming fees. This is having a serious impact on BTSC revenues and in turn leaves grooming to be conducted out of dedicated hours from volunteers. (A Section 57 was granted to the club as of the 2016-2017 season) As well as sledders, the project affects the whole community of Squamish and especially those in the Paradise Valley area. There is no access to water on Brohm, so for the resort to function, it would have to pump billions of litres of water from an aquifer that is essential to these community areas.

The GAS proposal isn’t really breaking news. It has been looming in different variations for over two decades but it continues to get pushed back and forth between the developers and their opposition. Although this battle seems like a David versus Goliath situation, it’s more Goliath versus Goliath than you would think. There’s no doubt that Aquilini’s financial power gives them leverage in this situation, but there’s also a number of land user groups, politicians and large companies that make up the opposition.

The elements of the situation alone are enough to leave the project dead in the water; there’s highly controversial environmental issues combined with huge market risk. With a series of low snow years and tough economic times the ski resort industry itself is already in hot water. Whistler Blackcomb is just under 50 minutes north of Squamish and the last thing they want is more competition in an already tough, declining market. To raise red flags further, GAS would have to draw billions of litres from the Paradise Valley’s aquifers, and in recent times long periods of draught have been increasingly common. That puts residents of Squamish and the Paradise Valley at higher risk of the taps running dry.

In the short term it will most likely be business as usual on Brohm ridge. Grooming will continue next winter because of gaming and other government grants and sledders will be able to access and ride the zone. It seems the GAS proposal will be stalled for some time, it could take another 5 to 10 years to see any groundbreaking changes in the situation. Yet the long-term fight for the area must continue, as the fate of Brohm and the rest of the Paradise Valley hangs in limbo. 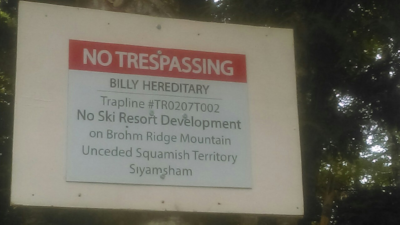